Now that we’ve grown used to seeing smartphones with curved screens, what’s next? Samsung seems to think that the next big hardware innovation is going to arrive with fold-able handsets. Back in 2015, the company was rumored to out its first such device this year, but that hasn’t happened and apparently won’t happen before December 31. A report from April said the first Samsung fold-able phone, code-named Project Valley, would instead show up in 2017.

Throughout all of this, we’ve never seen what said device will end up looking like. Until now, that is. Thanks to a patent application uncovered today, the three renders and one sketch you can see in the images below have been made public. And what do you know, they all depict a fold-able smartphone. 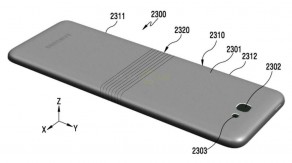